Skip to content
Last Updated on April 15, 2022 by Derek Backman 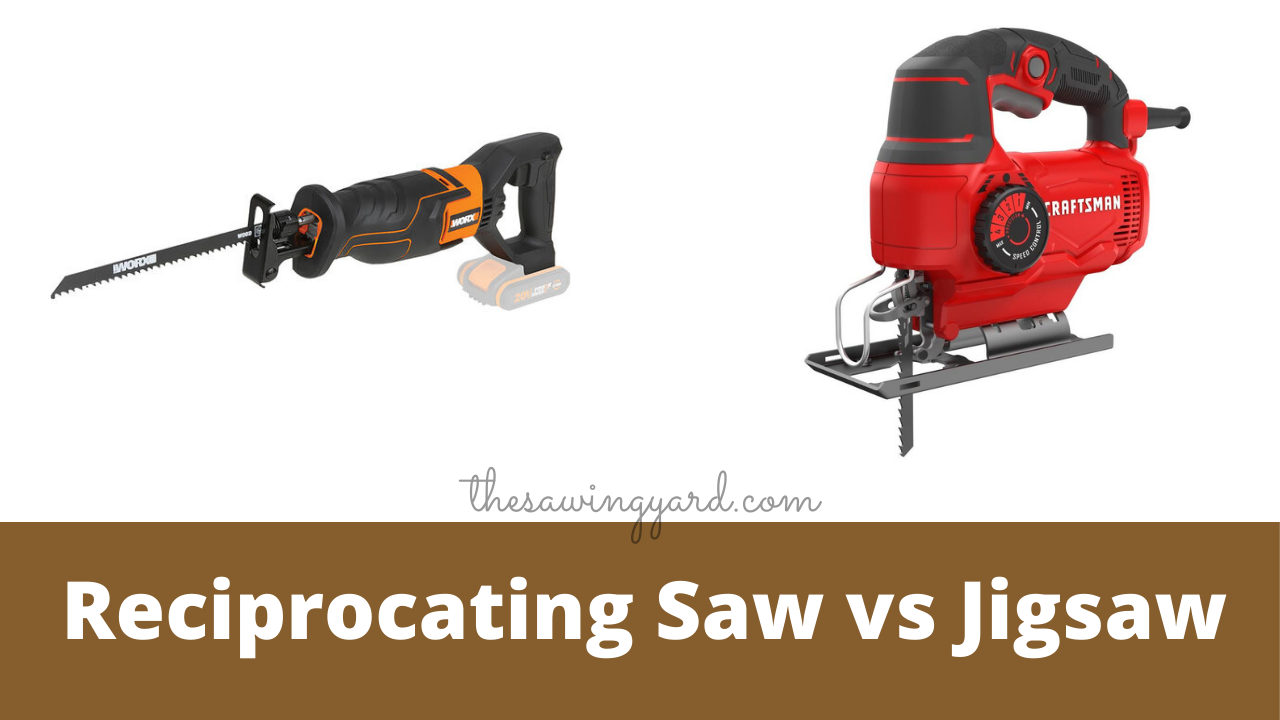 Reciprocating saws and Jigsaws have been known to play a huge presence in most professional or even DIY projects. Both tools are known to mimic the action and achieve the results as you would typically with a traditional saw. Even though conventional saws have been a sight of the ages, it has been an unbelievable feat that even today, the most advanced sawing tools mimic the technicalities of traditional saws. About a dozen kinds of saws have been mass-produced for decades, each proficiently fulfilling some or the other purpose.

If you’ve ever been into the renovation of a house, or say a big home project, it’s a surety that you might have bumped into jigsaws and reciprocating saws. Though being very different in their course of action, both have a lot in common.

Even after being so widely known, many homeowners are still clueless about both the tools. Even those with somewhat a little information aren’t too sure about what they should buy for their personal use. For several years into this, I was a little overwhelmed a few years back when I learned about these tools.

After getting different types of saws and spending countless hours with them on my projects, I’ve made this article to help you get a complete overview of both of the tools. I’ll list everything you need to know about reciprocating saw vs jigsaw, which will give you great clarity about what you should be getting for yourself!

Even though they are relatively lighter in weight, Reciprocating Saws are potent tools in operation used commonly in construction, electrical and plumbing-related work. Most saws are known mainly for producing intricate cuts and treating workpieces more delicately, but Reciprocating saws are often used to make rough cuts and demolition-related work.

Being extremely powerful in operation, the blades with reciprocating saws slice through hard metal, wood, and other sturdy materials. For most beginner DIY projects, not too heavy in operation, you’ll be good to go with another kind of saw. But when you finally transition to more of a serious DIYer with projects tackling remodeling or demolition is usually the time you get your hands for the first time on a reciprocating saw.

That being said, a reciprocating saw is anything but limited in its applications. A decent reciprocating saw will cut through most of the material you can think of, saving you lots of time and mechanical effort.

While you make the same time and effort with reciprocating saws, the advantages of these saws outweigh most of the kinds in many senses. Sometimes, cutting in through hard materials involves going to many congested places swamped with other stuff, where a big machine will likely cause problems.

Reciprocating saws come in handy here, being optimal and perfect in narrow and deep spaces where other tools don’t feel optimal. The blades on reciprocating saws, generally bimetallic, are pretty versatile and can help you make flush cuts on hard surfaces with ease!

These saws find their application in most construction work. In pruning work, reciprocating saws are used to make swift cuts in branches and large trunks, much cleaner cuts than the cuts you’d get from a chainsaw. 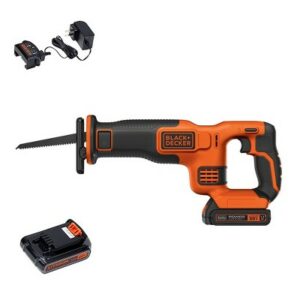 After using several high-end reciprocating saws, this saw from Black+Decker has proven to be miles ahead of every saw in almost every parameter! Along with the tool-free blade change, made to swap blades quickly without the help of any tool, Black+Decker also features a pivoting blade shoe with this saw which enhances its stability and control to a great extent.

My favorite feature of this saw is the electric brake, which has a built-in stopping mechanism giving you an extra layer of safety. It keeps you safe from accidents while performing heavy-duty tasks such as demolition.

The saw is cordless and lightweight, making it effortless to carry around. The powerful machine has a 20V lithium-ion battery that delivers a staggering performance, which gets you through years of household-related or even professional projects! If you’re looking for a reciprocating saw, blindly go for this one- the best!

Jigsaws have certainly been the most well-heard term when it comes to saws! Even though the fundamentals of all the saws are essentially the same, to get the sawing action on and do the job, Jigsaws has been particularly popular because of the efficiency with which they get the cuts done. Jigsaws, mainly known for making intricate curved cuts, can cut wood of different thicknesses and densities.

These saws even cut through steel, glass, and other materials when used with a specific blade. Being easy to use, Jigsaws are often the stepping stone of most DIYers into the community. Making intricate and detailed cuts gets extremely easy with Jigsaws as they’re very compact and handy. Even though Jigsaws are considered versatile, it’s a well-known fact that Jigsaws are more of a woodworker’s tool. They are often cordless, making them portable and easy to carry around.

The base of the jigsaw, also known as ‘shoe’ commonly, makes a ninety-degree angle with the blade while resting on the surface being cut. Jigsaws coupled with narrow blades are the best combination for most DIYers looking to get through minor tasks involving intricate cuts, effortlessly giving the most efficient cuts.

For anyone just getting into woodworking, jigsaws make up the best pathway for one to get started. It can get you done with most types of cuts on a workpiece, involving bevel, plunge, and curved cuts. 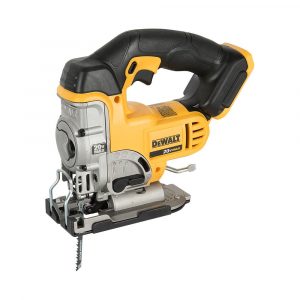 Dewalt has been a household name in the sawing community for years, and this jigsaw under their brand name is hands down the best jigsaw currently on the market! Built wholly on metal, Dewalt 20V Max comes up with a keyless blade change feature that lets you change blades effortlessly.

With the adjustable dust blower, Dewalt assures good cleanliness on the workpiece. Coming up with a variable speed of 0-3,000 SPM, you can test the fantastic versatility of this jigsaw with different materials.

Dewalt also features an anti-slip comfort grip for extra comfort and stability, which has been my favorite add-on about this jigsaw. With the 4-position orbital action, you’ll get the best speeds and efficient cutting quality on any workpiece! Even with dozens of jigsaws coming into the market every year, I strongly recommend DEWALT 20V MAX for its reliability and exceptional performance.

Difference Between Reciprocating Saw vs Jigsaw

While both have similar functionalities, the differences are incredibly significant to know before deciding the one for yourself. After using both, reciprocating saws and jigsaws over the years, there are few conclusive stark differences between the two. Reciprocating Saws are more suited for heavy-duty projects such as remodeling and demolition. In contrast, jigsaws are more appropriate for light DIY projects such as making curves cuts or bevel cuts on a wooden workpiece.

One stark difference between both saws is the design. While jigsaws have a handle along the top of the body, the jigsaw blade lays perpendicular to the bulk of the jigsaw. Jigsaws are compact yet powerful. On the other hand, reciprocating saws being much larger in dimension, come up with the blade in line with the body, being unshielded.

With jigsaws, you need the workpiece to lay on some supportive platform; reciprocating saws are handheld, making cuts feel much easier and quicker. That being said, if you are someone who prioritizes efficiency and clean cuts over everything, Jigsaws should be an ideal choice for you. As jigsaws are more proficient in making proficient cuts, they aren’t suitable for rough flush cuts, for which reciprocating saws seem to be the obvious choice.

Although quite different in their functionalities, both saws can perform a little of the main features of the other saw efficiently. For example, a reciprocating saw can be comfortably used as a jigsaw. Not yielding perfect cuts is something that’d come secondary, but you can still get more of the worth of the money you spend with a reciprocating saw. Even though the jigsaw is a versatile tool, you might want to keep your jigsaw away from heavy-duty tasks.

If you are looking to get started with woodworking, both saws are a little tough to get the hang of initially and will certainly take some effort to get comfortable with either of them. But in my personal experience, Recip Saws are the easiest saws to get started with for a beginner. While in operation, a reciprocating saw being handheld is much easier to operate than a jigsaw, which requires you to be delicate enough while making cuts.

Both reciprocating saws and jigsaws are handy in their ways; what one might need for personal use is something that depends on the priorities of an individual. Typically, a professional should get the best of both kinds; but when we talk about DIYers or newbies, one should list out the features they are looking for in a saw.

Anyone looking for a heavy-duty saw should go for a reciprocating saw. And if you’re looking to get a saw done with small tasks such as making intricate cuts on a wooden workpiece, you are best to go with a jigsaw. Even though both types of saws can do a little of everything, a jigsaw is undoubtedly an easier stepping-stone if you are an absolute beginner. 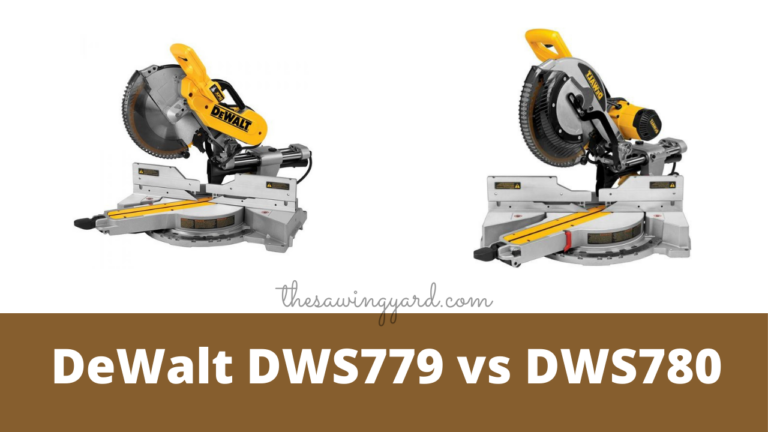 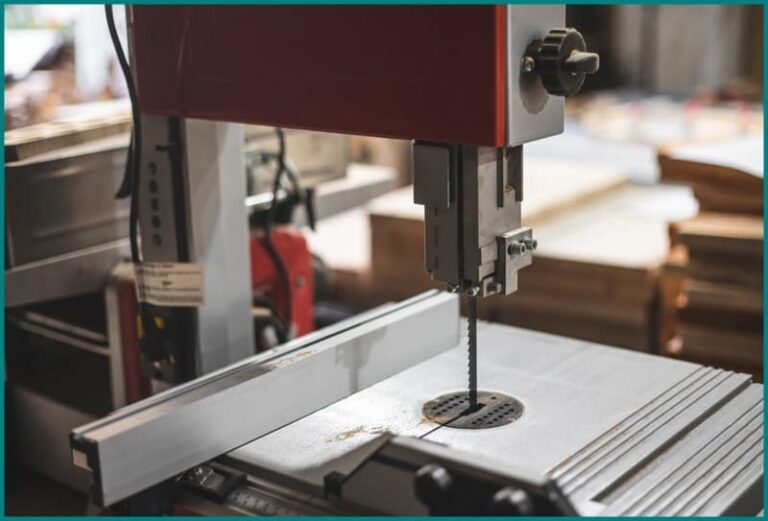 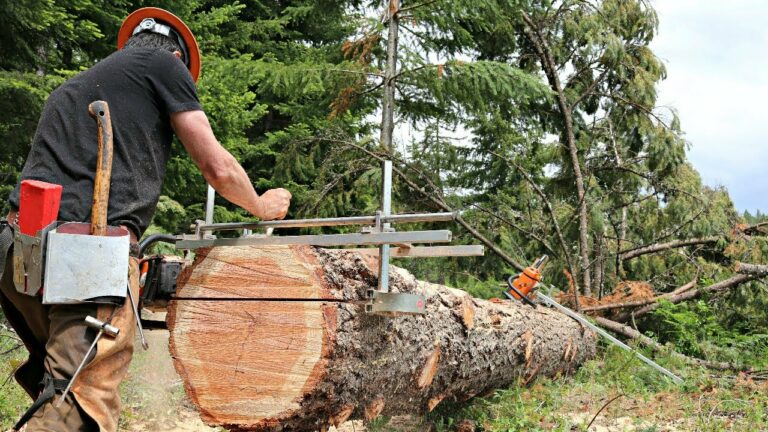 Best Chainsaw Mill for The Money in 2022 – Reviews & Buying Guide 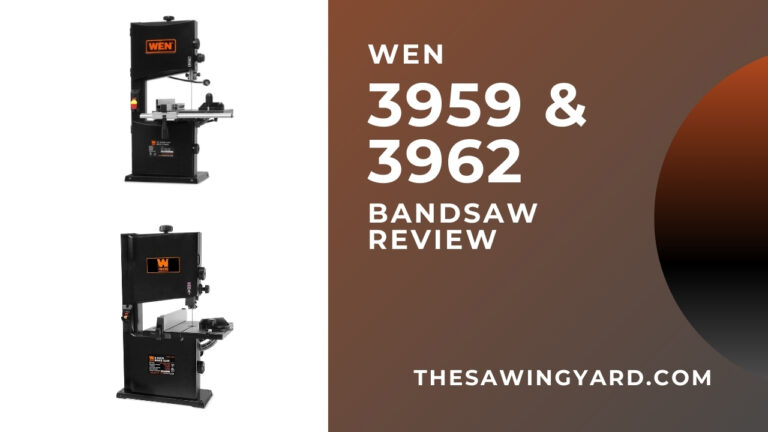 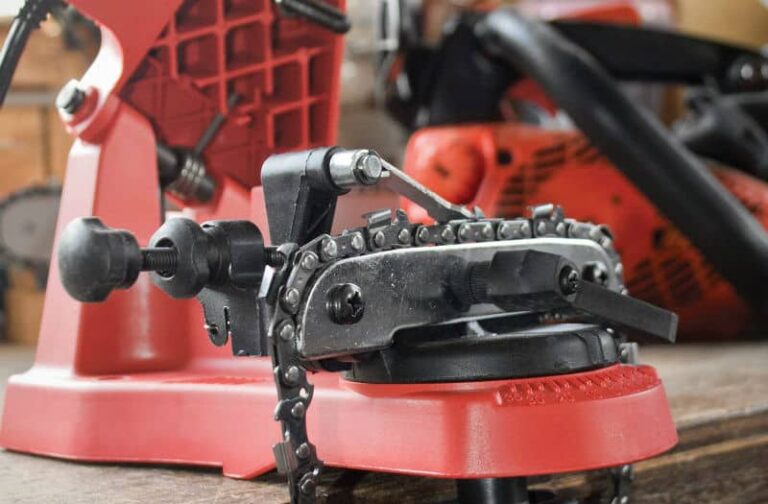 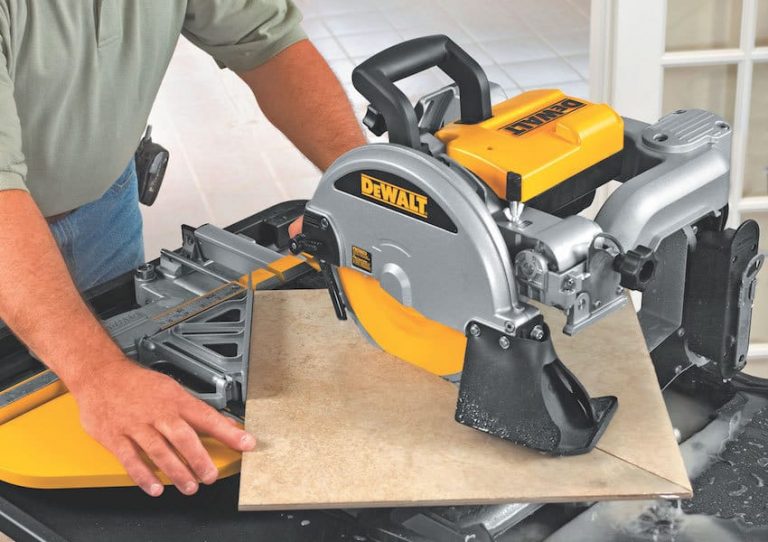