Skip to content
Last Updated on October 25, 2021 by Derek Backman 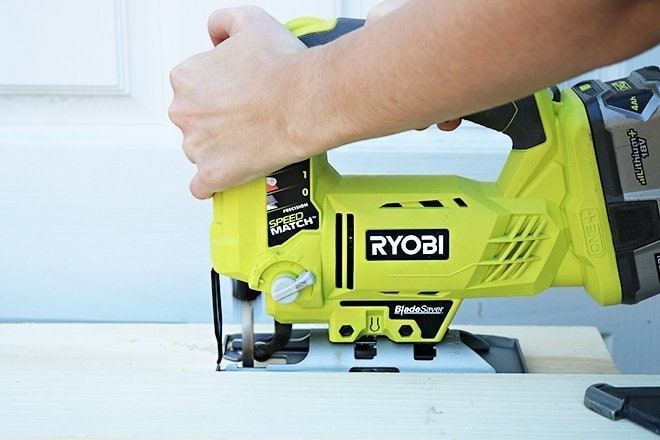 Jigsaw is that one tool that might pick dust on your top shelves for months but is impossible to kick off any woodworking task when you need it. Jigsaw is perhaps the most versatile and intimidating power tool that does look a bit complicated to get your hands on but gets easier with time and delivers absolute perfection in the cuts you make in your project.

A beginner can safely operate and work with a jigsaw and get accurate results with the requisite knowledge. Jigsaws work great on woods and plastic, metal, ceramic tiles, and much different material for the unaware.

The primary drawback of circular saws and other power tools, which makes jigsaws much more favorable and efficient in the woodworking industry, is their inability to make intricate cuts. When dealing with a super-easy task such as carving out a square piece out of a wooden sheet, it’s much doable with a basic circular saw.

But when you are working on a tedious DIY project which involves a lot of intricate and detailed cuts, everything except jigsaw will stand short with their inability to deliver the perfect detailings with which this one tool exerts superior performing domination on all. Albeit all the positives of the Jisgaws might seem tempting enough to get your jigsaw out, but having improper information or inefficient using techniques may cause irreparable damages.

We have prepared this guide for you to get your jigsaw to its brilliant purpose and make it work, delivering magnificent results! After putting insane efforts into this guide, I am pretty sure that you will find yourself comfortable around working with jigsaws in little to no time!

Although a jigsaw might look like a very complex tool at first when you start zooming in with your eyes, it’s effortless to get familiar with all the components that make it so versatile. A basic jigsaw comes with pulling mounted on the handle of the saw, which triggers the blade’s up-down motion and makes the saw operational. Once the trigger is released, the blade will come to rest.

It might not seem a new piece of information if you are familiar with saws, but blades and the saw’s base are mutually perpendicular with the surface it is resting on(which is supposed to be cut) for a standard regular cut. Since the jigsaws are known for aggressive bevel cuts, you can adjust the angle between the blade and the base, which gives you a tilted, sharp blade that could create fantastic bevel cuts!

Few high-end jigsaws will come under different settings for distinct cutting styles, i.e., straight and orbital. Operating a jigsaw in an orbital setting makes the blade move forward simultaneously while going up and down. This feature comes in handy when dealing with many tasks or a big project, but do note that cuts produced under this setting will not be precise enough.

TPI is a term you will encounter a lot while dealing with jigsaws, blades to be precise. TPI (teeth per inch) is nothing but the sharpness of teeth in absolute numbers. Higher the TPI, the sharper the blade. A higher TPI blade on a jigsaw can produce intricate and complicated cuts in a much neater way; with a high teeth-to-inch ratio, you will get a much smoother cut requiring less sanding.

Meanwhile, a blade with lower TPI will produce relatively rougher but quick cuts. So, you can cut some slack on TPI when dealing with rough work, and a low TPI blade will work fine on that. Make sure to get a high TPI blade when you are dealing with intricate woodworking for best results!

You don’t need a very high-end jigsaw to get by the basic tasks. But when you are working on a project involving detailed curved cuts or circular shapes, you should always try to stretch your budget a little to get the best jigsaw in the range!

Steps to Use a Jigsaw Properly 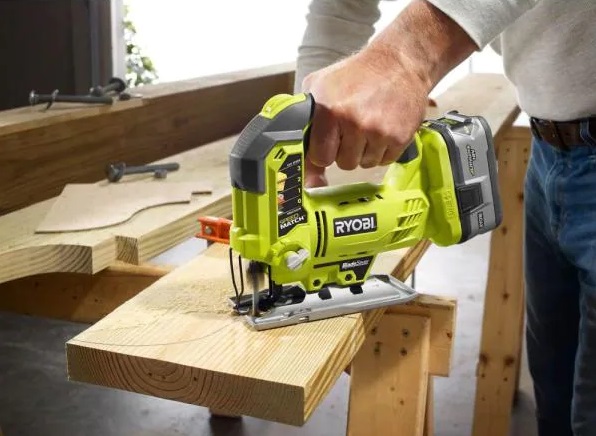 When you are just starting, it’s essential to kick off your journey with an elementary cut. It’s crucial to lay a building block before introducing complex arcs to the story. Similarly, you should focus on staying a little low-key and make some basic cuts to get started. Jigsaws aren’t conventionally easy to operate on big projects, but as time progresses, with practice, you will find yourself comfortable working on a jigsaw. Here is a step-by-step guide on how to use a jigsaw to make a standard basic cut on a surface:

On Countertops: While countertops can be dealt with circular saws to an extent, a jigsaw will make the job feel like a cakewalk! Make sure to use a special downcutting laminate blade, a 5/16 inch wide blade with a TPI of about eight will be decent enough for the job. Making curved cuts at the countertops is relatively easy with jigsaws. Even though it might take a bit more hours, the result will be satisfactory enough not to regret the time spent.

On Ceramic Tiles: The most important piece of advice, and perhaps the only one on using a jigsaw on ceramic tiles, is to be slow! Ceramic tiles constitute many levels of surface layers. Rushing through cutting it might make the things look pretty ugly. Make sure to use a carbide-grit blade, abrasive in nature, about a quarter-inch in thickness. Also, a basic jigsaw might not be the best choice to cut through the ceramic tiles with all the tight curves. Try to get a decent jigsaw with a movable scrolling head. It will make the whole process much smoother.

On Metal: Dealing with metals is a whole new dimension with a jigsaw. Metals are ductile, dense, sturdy, and possess almost no similarity with wood; it’s a different material in all senses. Even with a great jigsaw, you might end up shredding the metal in pursuit of cutting through. If you have to get the job done roughly, it’s not the worst idea to go all in freehand and use a jigsaw directly on the metal workpiece. But for a better cut, we recommend you to check out metal chop saws or miter saws.

When using a jigsaw, you need to get two thin sheets of plywood and clamp the metal workpiece between them. Indeed, it would be best if you got the whole thing done with the sheet of plywood on the top. This sandwich might be tough to go through, but you will have a great cut after using a decent 1/8 inch blade with a TPI of about 22. Also, know that this whole process requires you to be extremely patient and attentive. So make sure to have a slow pace from the time you pull the trigger to the moment you release it.

Here are some safety tips to keep in mind before getting your hands on jigsaw:

For beginners, it’s crucial to keep calm and enjoy the process. There’s no denying that getting incredibly intricate and beautiful cuts with jigsaw looks tough, but advancing to that stage is a fun-filled rich experience that one will enjoy. Woodworking is an art that could be mastered well by spending days with the tools. Make sure to follow all the safety tips. Ensuring your proper safety should be of utmost importance. 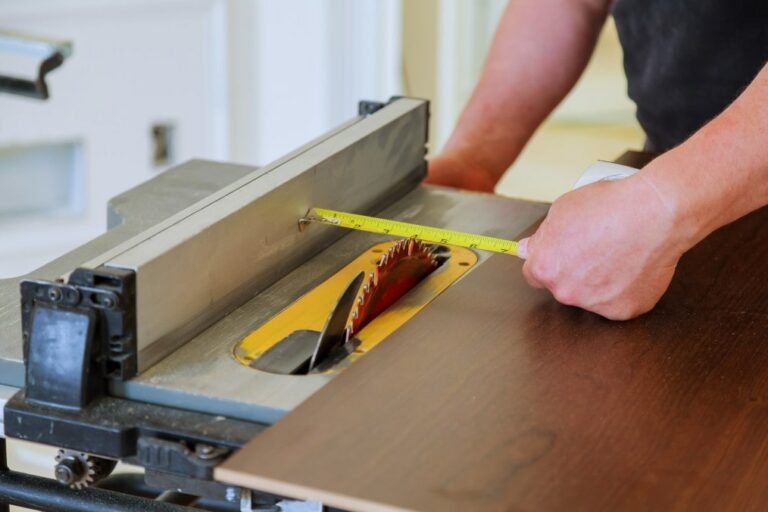 What Is Rip Capacity On A Table Saw? 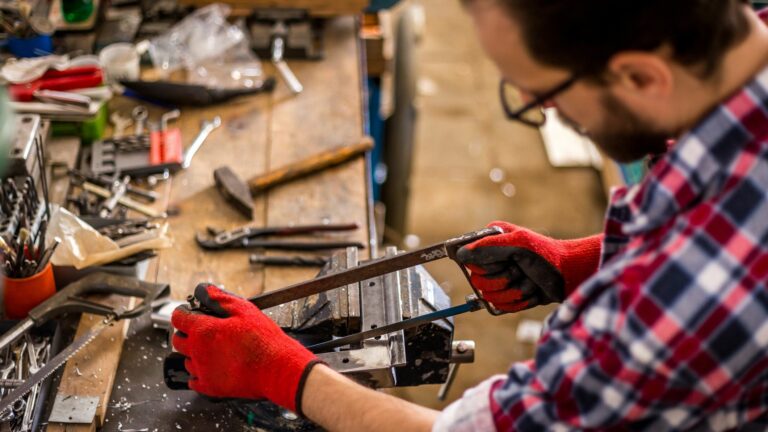 How to Cut Hard Plastic Without Breaking It – 3 Easy Ways 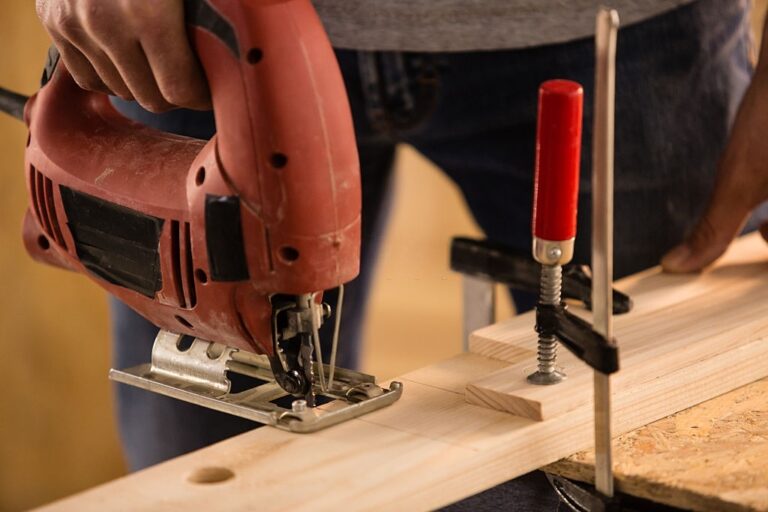 How to Cut a Square Hole in Wood using DIY Tools

How to Cut Stainless Steel – Foolproof Methods for Beginners 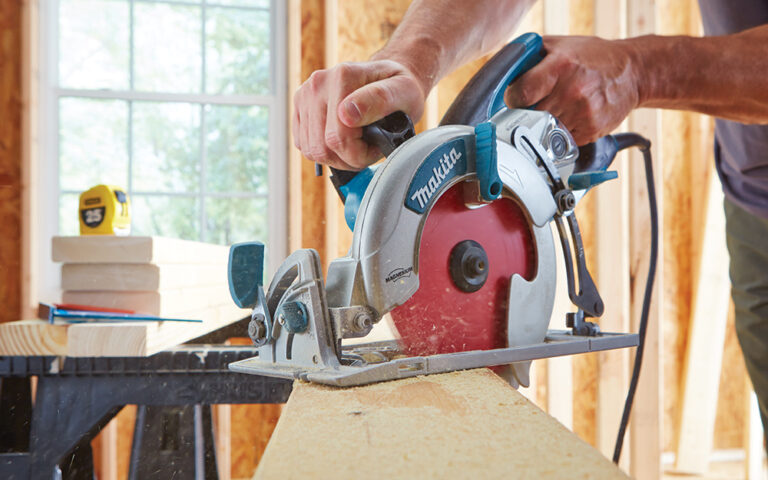 Jigsaw vs Circular Saw – Which Tool Should You Buy?